From the 1600s onwards - new materials, structures and ways of life

The study of historical heritage relates to the nature of life in post-contact Australia (1600s onwards). The first permanent Western Australian European settlements were in the 1820s in King George Sound in Albany and the Swan River Colony in Fremantle and Perth by 1829. Although some written records were kept for these European settlements, much has been lost over time and sometimes very little detail is actually known about the nature of early historical occupation. Archaeological surveys and excavations often reveal, document and plot historical features for the first time.

Whilst the historical period may only be a short span of time in comparison to the full human occupation of the continent, there is still plenty to learn about past generations through the remains beneath our feet. European arrival brought a new range of materials and objects to Australia, adding glass, metals, ceramic and paper to the archaeological record. The markings and designs of these objects allow us to tell a detailed story about who lived in these places, where they were from and what they did during their lives. European arrival also resulted in construction of more urbanised areas and the building of structures such as roads and jetties. Other examples of historical heritage include buildings, refuse depots and even accumulated debris beneath floorboards of historical buildings.

Many historical places and objects also have significance for Aboriginal people because of how they relate to the impact of European arrival. The British colonists did not believe that anyone owned the land in Australia before they got there. So European settlements were established across land that had been taken away from Aboriginal traditional owners. In addition to this, many Aboriginal peoples were forced to abandon their traditional lifestyles or lands to work as labourers or domestic staff, threatened with imprisonment, punishment or family separation. The pain of how traditional Aboriginal life was damaged is still very much felt today. However, there is still a strong and profound connection to country and to the ancestors for many Aboriginal people and much cultural knowledge has been retained. 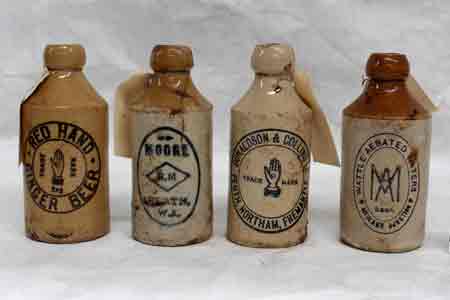 Ginger beer was a popular drink in British colonies and is thought to have originated in England in the mid-1700s. It could be either alcoholic or non-alcoholic. Ginger beer was typically stored in stoneware ceramic bottles and sealed with cork to preserve the natural fizz. In 1899 the carbonation process was introduced and extracts were used to adjust the taste. Eventually glass replaced ceramic for the storage of these beverages.
Australian heritage