Aboriginal people first arrived in Australia at least 60,000 years ago

People reached Australia by at least 60,000 years ago as part of the migration of modern humans out of Africa. Dating the first landfall is difficult because much of the ancient coastline is now underwater due to rising sea levels. However, the earliest arrivals reached the northern coastline of Greater Australia by 60,000 years ago and spread quite rapidly across the continent. This means that the ancestors of Aboriginal Australians had travelled across the world, navigated the south-east Asian seas and made Australia their home over 50,000 years before either the Pyramids or Stonehenge were built.

The first Australians encountered an environment that was generally cooler than today and much of the continent was better watered. This seems to have allowed fast expansion of populations into a range of different environments, including the deserts. The animals roaming the continent included Australian Megafauna which resembled some of the marsupials, reptiles, birds and monotremes of today, except they were much bigger. For example, wombats the size of cars (Diprotodon), kangaroos up to 3 m tall (Procoptodon), echidnas the size of dogs (Zaglossus) and goannas up to 7 m long (Varanus).

However, 45,000 years ago the last glacial cycle began to intensify, which meant that Australia became much drier and colder, with harsh arid conditions peaking at about 22,000 to 18,000 years ago (called the Last Glacial Maximum). Our coastline became bigger, reaching the edge of the continental shelf as the ice sheets dropped the sea levels. The world began to emerge from this Ice Age about 13,000 years ago, and climate generally improved (the beginning of the Holocene) with sea levels rising and flooding large tracts of land along the coast. Sea levels stabilised about 6,500 years ago and the present climate was established some 5,000 years ago.

Hundreds of Aboriginal groups lived in very different ways over a vast continent. In Western Australia, the evidence shows great artistic developments and increased contact between groups across vast tracts of land, particularly in the last 10,000 years. Rock art styles traded goods and elaborate personal adornment distributed across great distances, show us that there were sophisticated social networks spanning thousands of kilometres. People made increasingly complex tools and developed new technology to adapt to the changing environment.

Much of the archaeological evidence from Western Australia takes the form of surface artefact scatters. Other types of site include quarries, rock art sites, rock shelters, scarred trees and structures such as stone arrangements, which are commonly associated with ceremonial activity. There are lots of different types of Aboriginal artefacts, made from many different types of materials. The following are some of the more common examples:

The special thing about Aboriginal cultural heritage in Australia is the depth of connection and the use of storytelling to pass ideas, knowledge, culture and history through the generations. The cultural story (anthropology) and material remains (archaeology) of the last 60,000 years work together to explain the Aboriginal heritage of Australia. 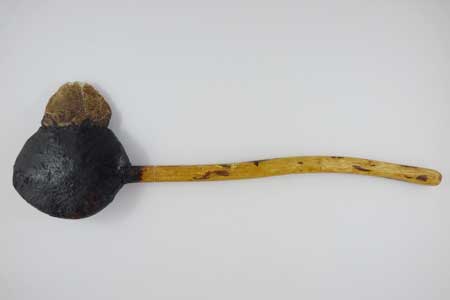 A kodj is a type of axe that has one or more shaped pieces of stone embedded in resin and attached to a wooden handle. This type of axe was only made by the Noongar peoples in the south-west of Western Australia 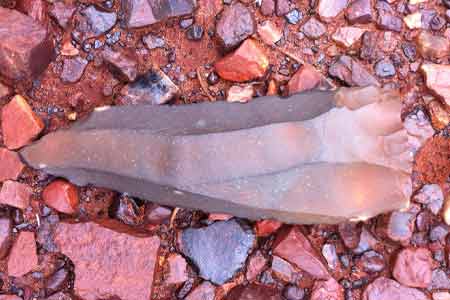 A blade is a type of stone tool made by Aboriginal people across Australia. They are long and narrow in shape, but they can be almost any size. This one is a specialised type called a ‘pointed trigonal blade’ because of its triangular cross section. This kind of blade was important as a trade and ceremonial item.
Australian heritage